Short definition: brachytherapy is also known as internal radiotherapy, sealed source radiotherapy or curietherapy. It is a form of radiotherapy whereby a radiation source is placed inside or next to the area requiring treatment. Brachytherapy is commonly used as an effective treatment for cervical, prostate, breast, and skin cancer and can also be used to treat tumours in many other body sites. (source: Wikipedia) 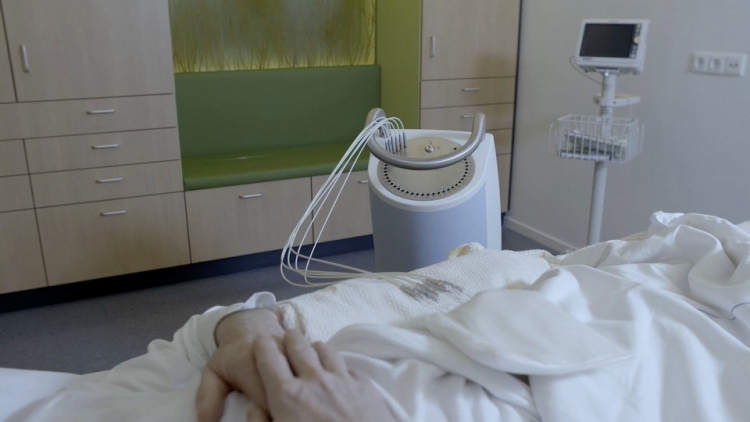 How is it different from external beam radiotherapy?

Except when a tumour is in the skin, all external beam radiotherapy arrives at the site of the tumour after having crossed other organs of the body, that might not require or benefit from the radiation. In modern external beam radiotherapy, the orientation of a large number of treatment beams usually distributes the dose in such a way that a larger area around the tumour gets a low radiation dose, and only in the area where the treatment beams converge, a high dose will be obtained (in the tumour). But the area around the tumour still gets some dose, higher or lower depending on the proximity to the tumour.

During a brachytherapy treatment, the source of the irradiation is placed close to or even inside the tumour. This means that the highest dose is immediately delivered where required, and this sometimes helps to strongly limit the dose to surrounding organs or tissues. Not only the amount of tissues receiving a high dose but also receiving a (not useful) small dose is reduced. This allows giving treatments with fewer side effects, or to accept the same risk of side effects as during an external beam treatment, and still give a higher dose to the tumour. Another advantage can be that the radio-active sourced placed during a brachytherapy treatment will usually move with the patient and the tumour. So the difficulties encountered during external beam radiotherapy that patients and tumours move is no longer a problem in brachytherapy.

This sounds like an excellent approach, but it is only possible for tumours where it is technically feasible to insert a radioactive source from the outside. It also requires the intervention of a radiation oncologist with special training. A further inconvenience is that the invasive procedure to insert the radioactive source can require local or general anaesthesia.

Brachytherapy in combination or not with external beam radiotherapy

A brachytherapy treatment requires first the insertion of a needle or catheter in the body, close to or in the tumour. A radioactive source can then be inserted into this catheter or needle. In prostate brachytherapy, low energy sources are left in the patient, and the needles are rapidly removed. This means that the sources will remain forever in the patient. These sources have however a limited lifetime: after a few months, they don't deliver any relevant irradiation anymore. This type of brachytherapy is referred to as 'permanent seed implant', and is best known for prostate treatments. 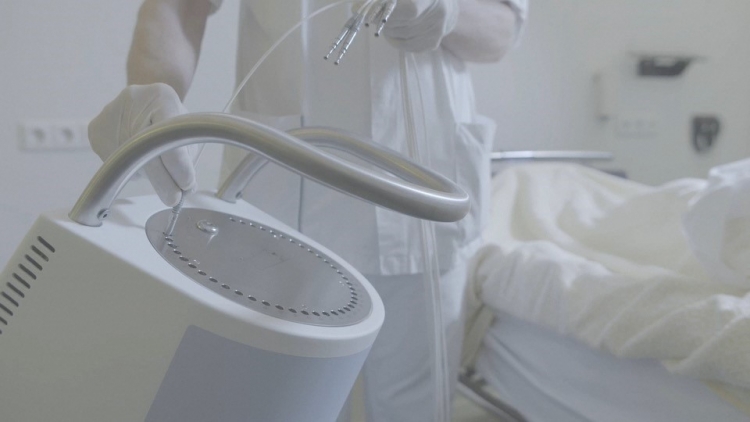 In case a source projector is used, sources of different strengths can be used. It is possible to use a system that inserts a source with a low activity continuously for a longer period of time (hours-days). This is called a 'low dose rate' treatment (LDR). The machine then imitates what would have been done in the past, when radioactive wires of needles of Iridium or Radium were inserted manually by a radiation oncologist, but these techniques are no longer used.

When the source is more active, it is also possible to insert it during a short amount of time (seconds to minutes), delivering a high local dose in little time. The effect of such treatment on tumours or surrounding organs can be different from an LDR treatment, so the radiation oncologist will have to select the optimal treatment, and recalculate the dose to be equivalent to the other treatment. This more rapid treatment is called 'high dose rate' (HDR). An HDR treatment is sometimes done in one fraction, but there can also be a series of fractions, just like for external beam treatments. In case there are different fractions, they can be given several times per day, or one per day, or one every few days.

An advantage of HDR treatment is that the source projector can advance the source in the needle or catheter to a specific point, and then start irradiating for a predefined number of seconds; The source is then slightly moved to a different position in the catheter, and again it will irradiate during a few seconds. By using multiple needles/catheters, and within each needle/catheter multiple spots where the source can stop (during a different time in each spot), one can create a distribution of the radiotherapy dose that follows very closely the ideal distribution as the radiation oncologist wanted. Most HDR treatments are delivered without the need for a hospital stay.

An HDR treatment thus has some precision advantages over an LDR treatment. In order to combine advantages of both HDR and LDR, some hospitals also have a source projector with a sourceless active than an HDR source. The system is installed in a hospital room, and gives a low dose HDR-like treatment in a precise way, during a few seconds. The source then returns in the treatment machine, and after one hour the same treatment is repeated. The patient usually remains connected to the machine via catheters during the full duration of the treatment (often 1-3 days). This technique is called 'pulsed dose rate' (PDR).

It is required that the needles or catheters in which the radioactive source will be inserted are positioned in or close to the tumour. If these needles or catheters are positioned IN the human body (by actively puncturing the skin with a needle), this is called 'interstitial brachytherapy'. Some tumours are however located close to an existing hollow organ in the body, like the vagina, the uterus, the oesophagus, ... If a source is brought into such an existing cavity, we call this 'plesiotherapy'.

The source that is inserted in the patient is classically a very small but active isotope. Nowadays the most used isotope is Iridium. Like most isotopes, Iridium loses its activity over time, which means that hospitals regularly need to buy new isotopes. Transporting and storing isotopes is complex, therefore a new system has been developed: electronic brachytherapy. This new system doesn’t contain any isotopes, but a miniaturised 'treatment machine (accelerator) on the tip of a catheter that can be inserted in a catheter already present in or on the patient’s body. When the machine is switched off, there is no remaining radioactivity. The only problem is that the accelerator at the tip of the catheter is a bit too big to go into any catheter to a needle placed in the human body. It is, therefore, most often used where larger catheters are possible, like in the case of 'plesiotherapy' (see above).

For treating skin cancers, surgery is the best and easiest option. After surgery, it can sometimes be useful to irradiate a larger area around the initial tumour to reduce the risk of recurrence of the tumour, or recurrence in the form of nodal metastases. This larger treatment is done by external beam radiotherapy. In other skin cancer situations, surgery alone would be enough. This is however not always desirable: tumours located on the face are operable, but these interventions might leave visible scars (for instance on the nose or close to the eyes). Furthermore, surgeons and dermatologists feel that the increase in operations to be done will increasing waiting lists. A possible solution can be the use of skin brachytherapy to treat some forms of skin cancer, without surgery and without external beam radiotherapy. This can also be an easy solution for elderly patients for whom surgery (with anaesthesia) may contain risks.

All modern external beam radiotherapy uses three-dimensional images to define where exactly the tumour is and to calculate very precisely how the irradiation dose will be spread in the human body. In the past, some brachytherapy treatments were NOT image based, and some care-providers still have the idea therefore that brachytherapy is out-dated. Nowadays, brachytherapy is very modern and precise and is image-based just like the better-known external beam treatments. This means for instance that gynaecological brachytherapy will be based on high-quality MRI images showing precisely the tumour extension.

A brachytherapy treatment requires the sources or source-vectors (needles, applicators, catheters, ...) to be inserted in the human body. That can be less comfortable, and it can be necessary to organize a general or local anaesthesia.

If inserting the applicator requires puncturing the skin, some blood loss or infection is possible.

Once the applicators are in place, they need to remain stable. So the patient should move as little as possible. For some locations of the body (for instance a gynaecological applicator), this can be annoying. This is more so the case if the treatment takes longer. As explained above, some PDR treatments can take several days, and in that case remaining in a bed with an applicator during a few days can be exhausting.

Other inconveniences can occur, in function of the type or location of the brachytherapy site. Ask your radiation oncologist! 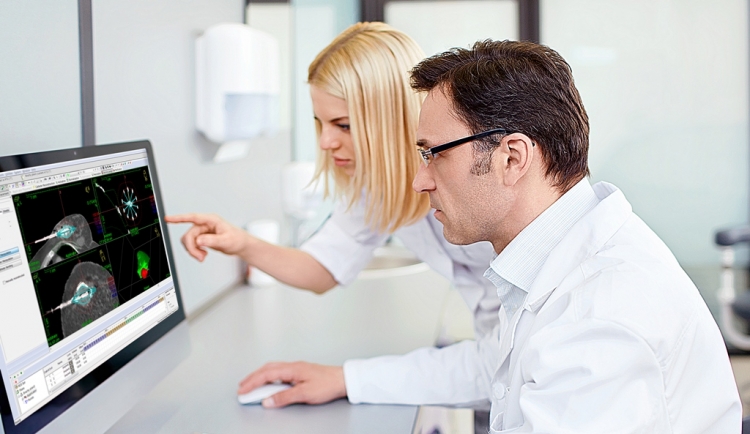